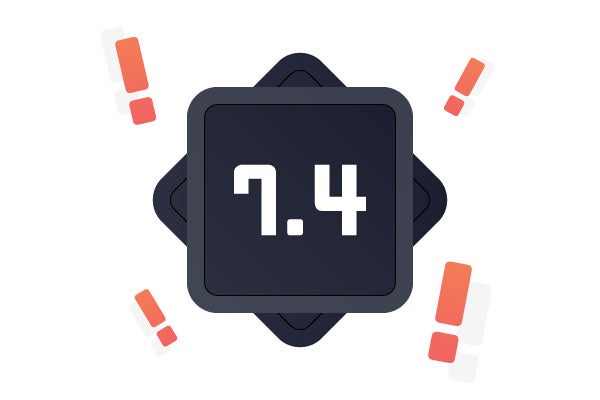 PHP 7.4 end of life (EOL) is nearly here. And, with a reported 65% of PHP applications using PHP 7.4, migrating to a supported PHP version and / or finding third party long-term support will be a widespread challenge.

In this blog, we walk through some of the basic considerations teams need to make while planning for PHP 7.4 EOL, including how to find the right migration path, the risks of unsupported EOL PHP, and long-term support options for teams that need more time planning their path forward.

The active support phase for PHP versions lasts two years from the GA release date. During active support, PHP versions (like PHP 7.4) receive regular patch releases (e.g. 7.4.1) that contain bug fixes and security patches. These updates are typically released monthly, unless there are no bugs or security issues (which is rare).

After two years of active support, PHP versions enter the Security Support phase. This phase lasts for one year, with the PHP community only supplying patches for critical security issues. Releases during this phase are on an ad-hoc basis, and are typically released less frequently than during the active support phase.

After the security support phase ends, the PHP version enters end of life. This means that it does not receive security patches, bug fixes, or other updates from the community. As bugs and vulnerabilities accumulate, teams using end of life PHP versions expose their applications to compounding risks.

The Consequences of Unsupported EOL PHP 7.4

But security isn’t the only consequence of unsupported EOL PHP applications. Teams working with EOL PHP versions also expose their applications to decreased performance, reduced application stability, and the lost-opportunity cost of maintaining an EOL PHP version when they could be helping to further the goals of the business.

When a PHP version reaches community support end of life, the community stops providing security patches for that version. As noted above, the accumulation of unpatched vulnerabilities adds an increasing amount of security risk to the application. And, if left unmitigated, these vulnerabilities can and will be exploited.

One of the often overlooked aspects of using end of life PHP versions is performance. New versions of PHP regularly add new features and improvements to the language that can reduce development, hosting, or hardware costs for the application. While this might seem like a lesser consideration, these costs can add up quickly – especially when deploying a large number of PHP applications, or applications that receive large amounts of traffic.

If applications aren’t regularly updated to new technology versions, there can be a growing risk of application downtime. As an example, an application running an EOL PHP version might be using a library that has since been deprecated. A bug within that library could cause the application to crash. Now imagine enterprise applications with dozens of un-updated libraries, or libraries that have been updated and cause issues with the EOL PHP application.

Lastly, there’s the danger of lost opportunity cost. Running an EOL PHP version means spending time on things like building or backporting patches for security issues and bugs. For supported PHP versions, this isn't an issue, and allows teams to better focus on improving the security, performance, or functionality of your application.

Backporting bug fixes and security patches isn't the only time-consuming aspect of maintaining an EOL PHP application, either. Profiling and improving performance on an application running on an EOL PHP version can be time intensive. But even the best performance improvements on that application can be overshadowed by the performance improvements gained by migrating to a new PHP version. That's not to mention new language features in newer versions that can solve a variety of problems for businesses.

Planning for PHP 7.4 End of Life

For teams with a limited number of applications or less complex codebases, these upgrades and migrations may be straightforward – depending on the changes between the origin and destination versions. For others, planning migrations for many applications (or particularly complex applications), can be a much more time-intensive exercise.

One thing to keep in mind for teams tasked with migrating PHP 7.4 is that this is the final PHP 7 minor release, meaning that there is no guarantee that the destination PHP version will be backwards compatible. More often than not, these major versions are only released when changes there are breaking changes to existing APIs that are exposed to consumers.

For teams planning PHP migrations or upgrades, having a consistently audited and profiled set of applications is key to understanding the impact of these major version upgrades on your code base, the scope of a given migration for your team, and the potential impact to the overarching business.

For teams that, for one reason or another, can’t migrate before PHP end of life hits, finding a reliable source of security patches is key to maintaining the stability and security of their given PHP applications.

Luckily, there are third-party options for PHP long-term support that can help teams to keep their EOL PHP applications supported.

Self-support is another option for teams working with EOL PHP 7.4 applications. However, teams that choose this route need to understand the impact this can have on their business. As noted above, developers who are busy developing patches for CVEs are developers who aren’t working on developing new applications, improving existing applications, or working on all the things that will make the next migration easier. While self-support may be a valid option for larger enterprises with resources dedicated to developing patches and fixes in house, it’s not a cost-effective option for 99% of companies.

Migrating or upgrading your EOL PHP is crucial to avoiding organizational risk – and PHP 7.4 is no different. Teams need to ensure they’ve established a good plan for moving on from PHP 7.4 before end of life hits. Or, if they know they won’t be able to migrate in time, they need to ensure they have a way to patch against vulnerabilities until they are able to migrate.

Luckily for PHP teams, Zend offers both migration support and long-term support for their EOL PHP.

Get LTS and Migration Services for Your PHP 7.4 Deployments

Start planning your migration and support strategy for your PHP 7.4 application with help from Zend. Visit our LTS and migration services pages today to learn more.