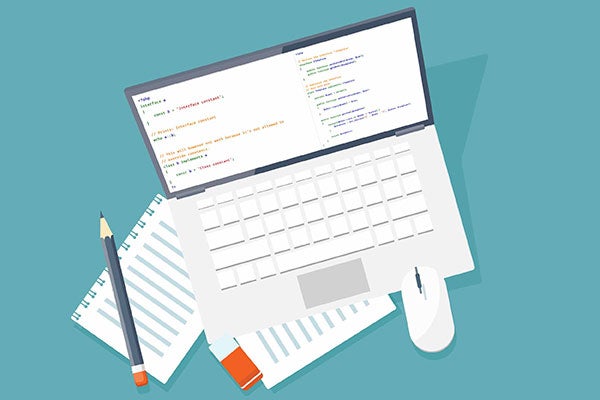 What Is an Interface In PHP?

What Is a PHP Interface?

In a previous article, I talked about PHP classes. Building on that, today we will talk about interfaces.

For an example of PHP Interface basics, we will consider "something that vocalizes". In the real world, this could be a bird ("tweets"), a dog ("barks"), a cat ("meows"), or a human ("sings"). The details of vocalization are specific to each type, but each can vocalize.

We could describe this as follows:

What we are saying above is: given a string $message, vocalize() will return what is heard as a string.

Now, an interface doesn't do anything on its own. It does, however, act as a PHP type. This means you can type hint on it as an argument, or even return something of that type from a function or method.

To create something of that type, we need to have an implementation available. Classes can implement an interface:

Let's say we have a function as follows:

The above function can be called with any $vocalizer that implements Vocalizer:

In a nutshell, interfaces give us a way to provide features without requiring class inheritance. This can be really useful for adapting existing classes to work in other contexts.
As an example, let's say we had a Bird class already that did not implement Vocalizer, but we had essentially equivalent functionality via a method tweet():

We could do one of two things to make this class a Vocalizer at this point, while keeping all existing functionality.

First, we could update the class to directly implement the Vocalizer interface:

Alternately, we could create an extension of Bird that implements Vocalizer:

Because this latter is an extension of Bird, it fulfills the Bird type for typehints; because it also implements Vocalizer, it also fulfills that type. You could also accomplish the above via an anonymous class implementation:

This leads us to a key rationale for using interfaces: the ability to substitute one type for another.

When performing object-oriented programming, there is a set of five core design principles that are recommended for creating flexible, maintainable architectures known as the SOLID principles:

What I want to point attention to here is the dependency inversion principle.

The dependency inversion principle states that we should depend on abstractions, not implementations. What does that mean?

Interfaces allow us to define these capabilities, and then allow our code to typehint against those capabilities, and not a more specific type. This in turn allows us to substitute different types when they fulfill the contract defined by the interface.

This can lead to creating a class that technically has a dozen or more different behaviors, but which is only used for one of them. By splitting these behaviors out into different interfaces, we can create classes that implement only specific behaviors, and use them wherever those behaviors are needed.

What Can We Define In an PHP Interface?

Now that we have a basic idea of what an interface is, why we might use one, and how we can implement one? What exactly can we define in an interface?

In our previous article on PHP classes, we noted that visibility is a more advanced topic. It still is, but we can cover some basics. In a nutshell, visibility helps detail what can use the functionality, and where. Something that has public visibility can be accessed both within class methods, as well as from instances. What is meant by the latter? In the following:

$chickadee is an instance.

You then refer to using the class name and constant name, separated by:

A class constant can be any scalar type, or an array, as long as no members of the array are objects. They can even refer to other constants if needed.

By convention, constant names are usually in ALL UPPERCASE, using underscore separators.

Constants defined on an interface are inherited by all implementations.

When defining a method on an interface, you omit the body and its braces, and instead end the declaration with a semi-colon (;); you are defining a signature only. These indicate what the implementation must define in order to be valid.

We've already seen a method definition previously, when we defined a vocalize() method on our Vocalizer interface:

As such, any implementation must define this method, and be compatible. They can add more arguments — but only if those arguments are optional. That's the only way they can differ.

One feature some languages offer is multiple inheritance. This feature allows an object to extend multiple other types, and thus fulfill them all. As an example, a Horse class could extend both an Animal and a Vehicle class.

PHP does not offer multiple inheritance, at least not directly. What it does provide, however, is the ability to implement multiple interfaces. This can be useful particularly when you want to describe a subset of features a particular class provides within a given context.

To implement multiple interfaces, you provide a comma-separated list of interfaces following the implements keyword when declaring your class:

An instance of this class would then fulfill typehints against each of these interfaces.

How should you name your interface? Generally speaking, name it based on the behaviors it describes. Per our example, we were defining something that vocalizes, so we named the interface Vocalizer.

This can be difficult to figure out, particularly if you extract an interface from a class you've previously defined, where the logical name is already the name of an existing class (e.g., you might want to define a Logger interface, but a Logger class already exists).

Sometimes the naming difficulty is due to having a team of developers from different backgrounds or countries (e.g., some members of the team might not share the same native language). As such, many projects use an Interface suffix to simplify the naming decision, as well as to call out which class files in a project are contracts versus implementations.

You and your team should decide which approach makes most sense for you!

This write-up is hardly exhaustive. Zend by Perforce has a number of resources to help you learn more about object-oriented programming in the PHP language. Check out our training options here.